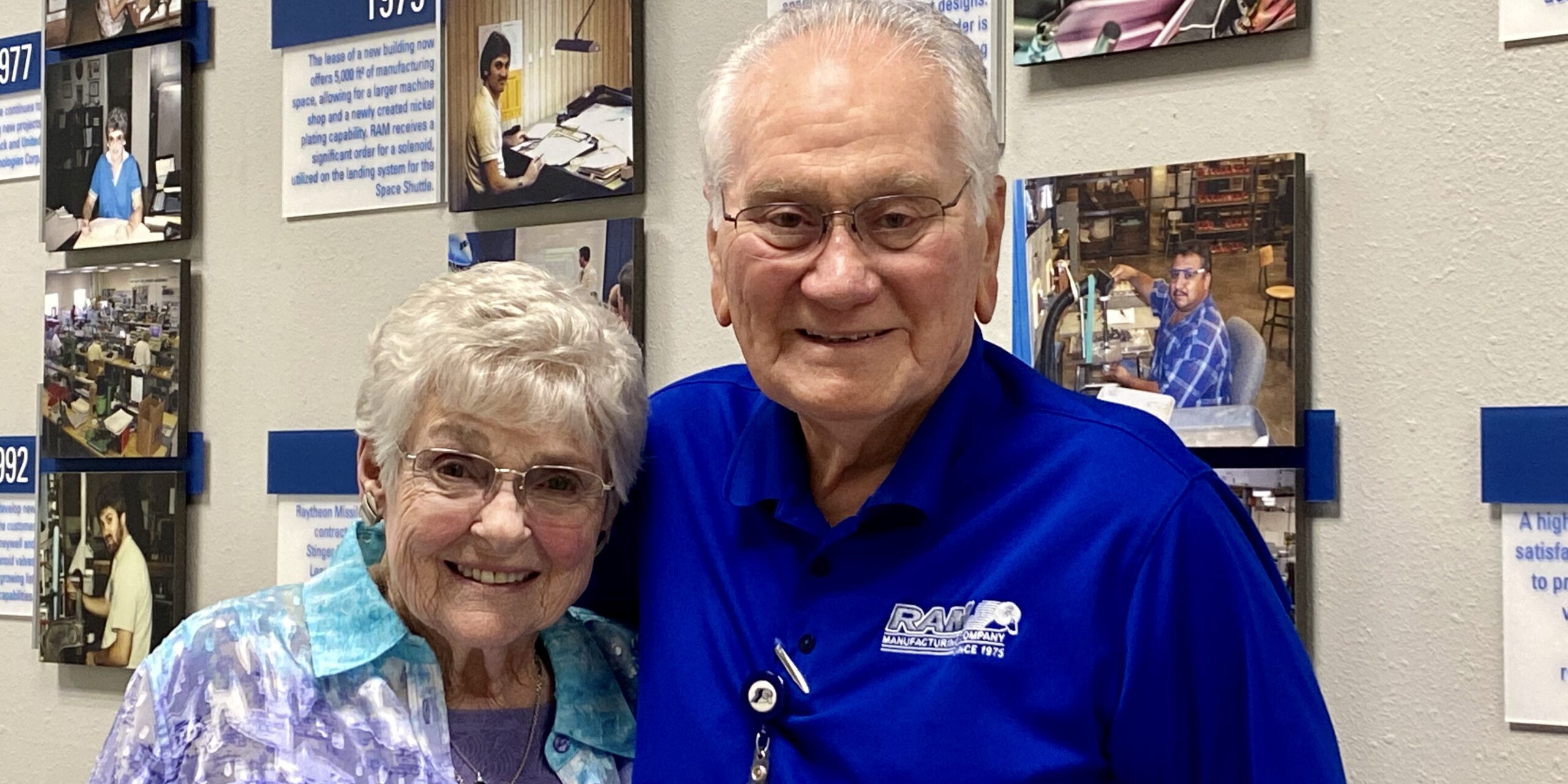 When husband and wife Ray and Melzie Ganowsky started RAM Company 45 years ago, they weren’t aiming for the stars. They were just trying to earn a living, Ray Ganowsky told St. George News. But that humble beginning has grown astronomically.

On Friday at 3:49 a.m., propulsion valves designed and manufactured at RAM Company will help send a manned SpaceX ship, the Dragon 2, from NASA’s Kennedy Space Center in Florida to deliver cargo to the International Space Station.

“When we started out, we had no idea the problems we’d face,” said Ray Ganowsky, an engineer with 31 patents to his name. “To begin with, there was no shipping from St. George!”

Ganowsky, whose first break came when he built a solenoid for Kohler’s small engine division, said that they could occasionally get SkyWest to put something on a plane.

To which Melzie Ganowsky added: “They were very kind, but they were in the business of transporting people.”

The Ganowskys were working out of their garage then. Ray Ganowsky said he was occupied with designing and building solenoids, mostly, while his wife focused on payroll and shipping, among other tasks.

“Our goal was to build quality parts at a reasonable price,” he said. “And, we’d ship it on time. The most important thing when you’re in business for yourself is to build a rapport with your customers, which helps build your reputation, your pedigree.”

The Ganowskys said they lived by those values then as they do now. After successfully designing a solenoid for Kohler, Ray Ganowsky designed one for the post office. It’s responsible for opening and closing the gate on millions of automatic mail sorters throughout the United States.

Though they’d contributed to the way mail is sorted, shipping was still a challenge for the Ganowskys. In those early days, they said, they went to deliver a part to SkyWest in St. George.

“We had to get this part to Cleveland,” Melzie Ganowsky said. “But we missed the plane. Well, they said our next best shot was to drive to meet the plane in Las Vegas. So off we went.”

They missed the plane in Las Vegas, too. The clerk said that if they wanted that part to get to Cleveland on time, they’d have to go to LAX in Los Angeles.

“We got back in the car, and drove straight through the night,” Ray Ganowsky said. “We arrived as the sun was coming up the next morning. And we got the box on the plane.”

The funny thing is, they said, they were from Los Angeles. That trip, which helped establish their reputation as dependable contractors, was one of those full-circle moments. After living and working in upstate New York, they moved to St. George to go into business for themselves, founding RAM Company, an acronym for Ray And Melzie.

In some sense, like the part, they were on their way.

Like the Ganowskys, RAM Company’s CEO, Gregg Robison’s journey to St. George traces circular lines. Robison grew up in St. George,  before earning degrees in mechanical engineering from the University of Utah and a master’s in business administration from Marquette.

“I was named student of the month,” he told St. George News. “I said I wanted to be an aerospace engineer. Shortly before that, I didn’t even know what an engineer was.”An engineer with significant leadership experience, the Ganowskys said he’s the perfect fit for their company. When he was 17 years old, Robison had his picture in The Spectrum.

Robison said it was David Burr, his physics teacher at Dixie High School, who put the idea in his head.

“He said that I was good at math, so I should be an engineer,” he said.

“I’ve taught about 7,500 students during my career. Gregg is one of about a dozen who really stood out,” he said. “He was great at math, creative and energetic. That’s a good combination for an engineer.”

It may have been the ability to dream things up, then bring them to life in the world that won over Robison. After earning his degrees, he worked for Parker Aerospace, Crane Aerospace and Electronics and ITT Aerospace Controls, among others, as he moved around the United States.

Landing in St. George was turbulent, though, Robison said. Having worked with companies that valued the bottom line, or revenues over people, he said he found the opposite is true of RAM Company, which is why the past year-and-a-half has been troubling.

“We’ve faced a couple of major challenges,” he said. “Between COVID-19 and the Boeing 737 debacle, we lost a lot of work.”

COVID-19 led to many planes being grounded for months as companies around the U.S. buckled down to prevent the spread of the virus. Boeing’s 737 had many problems, which resulted in two crashes that led to the deaths of 346 people.

“We had to let about 100 workers go,” Robison said. “We’ve got about 200 employees here in St. George, and we’re building back steadily.”

What kept the company afloat was military and space contracts, he said. While RAM has contracts with Raytheon Missile Systems, they also have contracts with SpaceX and Blue Origin.

“We design and build propulsion valves for the thruster systems used on the Dragon 2,” Robison said. “There’s 32 valves on each Dragon 2 unit. They enable the Dragon 2 to dock on the International Space Station by controlling the trajectory on the spacecraft. This requires an incredible amount of precision.”

The cone opens up to reveal the docking port, he said.

“Our propulsion valves fire during the approach to align the trajectory of the spacecraft with the docking station and ensure a successfully smooth and accurate landing on the space station.”

“Which goes back to the Ganowskys’ beginnings,” Robison said. “Ray’s dad helped with machine work when they couldn’t find machinists in St. George. Melzie taught others to wind coil. It all starts with our employees, no matter what department they’re in. This is a mom-and-pop business that aims high.”

Director of engineering, Tom Thompson, joined RAM Company 25 years ago after earning a bachelor’s degree in mechanical engineering from Utah State University. He began as a project engineer, then worked his way up to his current position. Though he seems laid-back, he lights up when he begins talking about the technological advances made within the past few years.

“I’ve been working on these projects since 2016,” Thompson told St. George News. “The level of  design and development – the advances we’re making – are unbelievable. We’re riding the wave created by Bezos and Musk.”

Thompson said that, though Musk and Bezos are both pouring resources into their space programs, which is fueling technological advances at a historic rate, their respective reasons are distinct.

“Musk is interested in making humans interplanetary,” Thompson said. “He wants to build livable structures on Mars, while Bezos wants to move manufacturing into space – as well as shipping – off planet Earth in order to preserve it.”

Those are lofty goals, Thompson said, but they’re getting closer to becoming a reality.

“We’re making these parts smaller and cheaper than ever,” Thompson said. “And we’re also making them to be reusable. It takes an immense amount of work, but the past five or six years have been the most fun and exciting I’ve had so far.”

Jansyn Johnston, RAM Company’s lead engineer on the SpaceX project, joined the company less than a year ago. She worked as a brand specialist at Old Navy while she put herself through Embry-Riddle Aeronautical University, where she earned bachelor’s and master’s degrees in mechanical engineering.

She said that she, too, is riding the wave.

“This is an exciting moment, because space exploration has ignited innovation everywhere,” Johnston told St. George News. “This stuff takes so much work. The specifications of the parts have to be so minutely precise. It blows you away.”

Thompson was the one who recruited Johnston to work with RAM. While he said he knew she was a good fit for the company, he couldn’t have foreseen how well she aligned with RAM’s history, or its founders’ work ethic.

“Throughout this process, I’ve put in 40 hours a week into this project,” Johnston said, adding that she juggles multiple projects at a time. “Sometimes I work seven days a week.”

Of the stories Johnston shared with St. George News, one drew a clear line connecting her to the Ganowskys.

The parts they make are in high demand and must ship promptly. But the shipping challenges that the Ganowskys knew still persist today.

“My team and I had just put in a lot of time and effort to finish a part,” she said. “We had to get it to Hawthorne, California, where SpaceX headquarters is located. Because we don’t have direct flights to Los Angeles, I had to drive it there.”

“I was worried about the parts,” she added, “so I buckled them in.”

The Ganowskys still visit RAM Company headquarters once a week. On a cool and hazy Tuesday morning in St. George, Melzie Ganowsky opened the door to her office, propping it open with a frog-shaped doorstop.

“That’s Freddie the Frog,” she said. “He holds the building up.”

She laughed, then said that, in fact, it’s the staff that keeps RAM Company going.

“We’ve been very fortunate to have such great people working with us,” she said.

When the Ganowskys moved to St. George 45 years ago, they said they thought they’d have a garden. They both laughed at the notion. Yet through their combined skills and dedication, they built a multimillion dollar engineering and manufacturing company.

“It would be almost impossible to do what we did then today,” Ray Ganowsky said.

“It’s hard,” he said. “After 45 years, I’m still thinking of the company’s survival. Even now, I’m putting people and systems into place.”